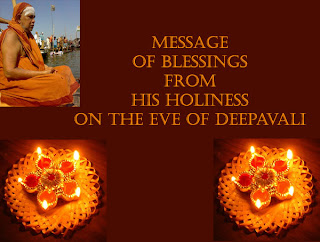 India is a land of festivals. Diwali, the Festival of Lights, is celebrated with fervor and gaiety. The festival is celebrated by young and old, rich and poor, throughout the country to dispel darkness and light up their lives. The festival symbolizes unity in diversity as every state celebrates it in its own special way.

The celebration of the four-day festival commences on Aswayuja Bahula Chaturdasi and concludes on Kartika Shudda Vijiya. The first day of the festival Naraka Chaturdasi marks the vanquishing of the demon Naraka by Lord Krishna and his wife Satyabhama.

'Puranas' have it that Naraka, son of Bhudevi, acquired immense power from a blessing given by Lord Brahma after a severe penance. He soon unleashed a reign of terror in the kingdom of Kamarupa, harassing celestial beings with his invincible might. Unable to bear the tyranny of the demon, the celestial beings pleaded with Lord Krishna to save them from his torture.

But Naraka could not be easily killed as he had a boon that he would face death only at the hands of his mother Bhudevi. So, Krishna asks his wife Satyabhama, the reincarnation of Bhudevi, to be his charioteer in the battle with Naraka.

When Krishna feigns unconsciousness after being hit by an arrow of Naraka, Satyabhama takes the bow and aims the arrow at Naraka, killing him instantly. Later Lord Krishna reminds her of the boon she had sought as Bhudevi. The slaying of Naraka by Sathyabhama could also be taken to interpret that parents should not hesitate to punish their children when they stray on to the wrong path. The message of Naraka Chaturdasi is that the good of the society should always prevail over one's own personal bonds.

The second day is Amavasya when Lakshmi puja is performed. It is believed that on this day Goddess Lakshmi would be in her benevolent mood and fulfill the wishes of her devotees. One version says that it was on this day that Goddess Lakshmi emerged from Kshira Sagara (Ocean of Milk) when the Gods and demons were churning the sagara (ocean) for nectar (Amrit)

The other version is that when Lord Vishnu in the guise of Vamana, sought three feet of land from the generous demon king Bali, the latter had to surrender his head as Vamana had conquered the earth and the sky in two strides. Lord Vishnu banishes Bali into the Pathala Loka (netherland) by keeping his third stride on Bali's head. Later, pleased by his generosity, Lord Vishnu grants him a boon and he in turn requests the Lord to guard his palace at Pathala Loka.

Meanwhile, the Goddess is unable to bear the separation and her grief affects the functioning of the entire universe. Brahma and Lord Shiva offer themselves as guards and plead with Bali to relieve Vishnu. So, on the Amavasya day, Lord Vishnu returns to his abode and Goddess Lakshmi is delighted. It is believed that those who worship Goddess Lakshmi on this day would be bestowed with all the riches.

The third day is "Kartika Shudda Padyami." On this day Bali would come out of Pathala Loka and rule Bhuloka as per the boon given by Lord Vishnu. Hence, it is also known as "Bali Padyami".

The fourth day is referred to as "Yama Dvitiya." On this day, sisters invite their brothers to their homes.

However, in the northern part of India it is celebrated as the return of Ram along with Sita and Lakshman from his 14 years of exile after killing Ravana. To commemorate his return to Ayodhya, his subjects illuminated the kingdom and burst crackers. For the Gujaratis, Marwaris and other business community Diwali marks the worship of Goddess Lakshmi and also the beginning of the new financial year.

For Bengalis, it is the time to worship Goddess Kali or Durga. The Goddess Durga continued her "Vilaya Tandava" even after killing demon Mahishasura.

The festival of Diwali is celebrated by Indians throughout the world in a joyous mood, with zeal and enthusiasm. The festival is predominated by colorful display of lights, bursting of crackers, cleanliness, sweets, lots of shopping, happiness. The festive spirit brings people of different communities closer, to celebrate the vibrant festival in the most blissful and lively way. Like most of the festivals in India, Diwali too has its base in mythology and there is a very interesting history about this festival. Go through the following lines to get information on the history of Diwali.

Dhanteras History
The first day of Diwali celebration is marked by Dhanteras. According to the legends, during the churning of ocean by the Gods and the demons, Dhanvantari - the physician of the Gods came out of the ocean on the day of Dhanteras, with a pot of amrita that was meant for the welfare of the humankind. This day also marks the arrival of Goddess Lakshmi, which is celebrated by drawing small footprints of the deity, with rice flour and vermilion powder.

Narak Chaturdashi (Choti Diwali) History
One famous story behind the celebrations of Diwali is about the demon king Narakasur, who was ruler of Pragjyotishpur, a province to the South of Nepal. During a war, he defeated Lord Indra and snatched away the magnificent earrings of Mother Goddess Aditi, who was not only the ruler of Suraloka, but also a relative of Lord Krishna's wife - Satyabhama. Narakasur also imprisoned sixteen thousand daughters of Gods and saints in his harem. A day before Diwali, Lord Krishna killed Narakasur, released the jailed daughters and restored the precious earrings of Mother Goddess Aditi.

Diwali And Shri Ram of Ayodhyaa
The most famous legend behind the celebrations of Diwali is about the prince of Ayodhya Nagri - Lord Shri Ram. According to the legend, the king of Lanka, Ravan, kidnapped Lord Ram's wife (Sita) from the jungle, where they were staying as per the instructions of King Dashratha, father of Lord Ram. Then Ram attacked Lanka, killed Ravan and released Sita from the custody. He returned to Ayodhya with his wife Sita and younger brother Lakshamana after fourteen years.

Therefore, the people of Ayodhyaa decorated their homes as well as Ayodhyaa, by lighting tiny diyas, in order to welcome their beloved prince Shri Ram and Devi Sita. It was the day of 'Kartik Amavasyaa' when they also celebrated the victory of Shri Ram over the King of Lanka, Ravan. Ram is considered the symbol of good and the positive things and Ravan represents the evils. Therefore, Diwali is considered the festival, which establishes the victory of good over the evil. On the night of Diwali, people light diyas, which is again an icon of positive energy to conquer darkness, the is symbol of negative energy.

Govardhan Puja History
'Govardhan' is a small hillock situated at 'Braj', near Mathura. The legends in 'Vishnu Puraan' have it that the people of Gokul used to worship and offer prayers to Lord Indra for the rains, because they believed that it were He, who was responsible for rainfall for their welfare. However, Lord Krishna told them that it was Mount Govardhan (Govardhan Paevat) and not Lord Indra, who caused rains. Therefore, they should worship the former and not the latter.

People did the same, which made Lord Indra so furious that the people of Gokul had to face heavy rainfall because of his anger. Lord Krishna came forward to ensure their security and after performing worship and offering prayers to Mount Govardhan, he lifted it as an umbrella, on the little finger of his right hand, so that everyone could take shelter under it. After this event, Lord Krishna was also known as Giridhari or Govardhandhari.

Bhai Dooj History
According to the legends, Lord Yamraj, the God of Death, visited his sister Yamuna on the 'Shukla Paksha Dwitiya' day in the Hindi month of 'Kartik'. When Yamraj reached Yamuna's home, she welcomed him by performing his aarti, applying 'Tilak' on his forehead and by putting a garland around his neck. Yamuna also cooked varieties of dishes, prepared many sweets for her brother and offered all those to Him.

Lord Yamraj ate all those delicious dishes and when he was finished, he showered blessings on Yamuna and gave her a boon that if a brother visits his sister on this day, he would be blessed with health and wealth. This is why this day of Bhayya Duj is also known by the name of 'Yam-Dwitiya'. Thus, it has become a tradition that on the day of Bhai-Dooj for the brothers to visit their sisters' home and offer them gifts. Sisters also make various dishes for their brothers and give gifts to them.

History Of Sikh Community's Diwali
In the Sikh community, Diwali celebrations have special importance as for them it, is popular as the day when their sixth Guru, Guru Har Govind ji came back from the captivity of the fort of Gwalior city. The people illuminated lamps in the way to Shri Harmandhir Sahib, which is known by the name of 'the Golden Temple', to honor and welcome their beloved Guru.

History & Origin of Diwali
The history of Diwali is related to the Hindu Purana(s). Hindus believes that whenever the power of evil increases in the world, Vishnu comes down to earth in a different form to defeat evil. These forms are called Avataras. Krishna and Rama are the popular Avataras of Vishnu. Goddesses accompany gods. Diwali celebrations are especially a time for telling stories about Vishnu and his wife Lakshmi, and about Krishna, Rama and his wife Sita.

The Story of Rama and Sita
Lord Rama was the seventh incarnation of Lord Vishnu. He was a great warrior King who was exiled by his father Dashratha, the King of Ayodhya, along with his wife Sita. Lord Rama returned to his Kingdom Ayodhya after 14 years of exile, in which he put an end to the demon Ravana. After this victory of Good over Evil, Rama returned to Ayodhya.The people welcomed them by lighting rows of clay lamps. Great celebrations were held and everyone was happy for Rama to be the King of Ayodhya. So, it is an occasion in honour of Rama's victory over Ravana.

Krishna and The Mountain
According to Hindu mythology, Lord Krishna persuaded the people of Gokula to worship the mountain Govardhan instead of God Indra . Indra sought revenge. He sent thunder and torrential rain down on the village. Lord Krishna saved the villagers by lifting the top of the mountain with his finger .The people gathered under it until the storm passed away. The offering of food to God on this day of Diwali is a reminder to Hindus of the importance of food and it is a time for being thankful to God for the bounty of nature.

Lord Krisna and Narakasur
When people got the news of destruction of Narakasur by Lord Krisna on the day before Diwali , they celebrated Diwai .

The Story of King Bali and the Dwarf
The Diwali origin also lies in the story of Lord Vishnu and King Bali. Vishnu came to earth in the form of a dwarf. King Bali was send to the underworld.

Swami Dayananda Saraswati
Diwali history says Swami Dayananda Saraswati, that leonine sanyasin who was one of the first to light the torch of Hindu Renaissance during the last century, passed into Eternity on this day. The lights kindled on this day also mark the attempt of their followers to immortalize his sacred memories. The passage of these great men have indeed brought the national-cum-spiritual tradition of Diwali right up to modern times.