DUSSEHRA:Nine days of colour and tradition 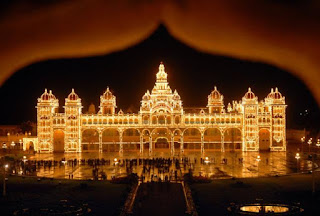 This is one of the major festivals celebrated across the country during September/October. Dasara conjures up different images of which Ramlila in the north, Durga Puja in the East and Garbha dance in the west are notable.

However, it is the Mysore Dasara which captures the imagination with a recorded history of at least 400 years.

Inspired by the regal paraphernalia of the Vijayanagar emperors who used to celebrate Navaratri between 13th and 16th centuries, the Wadiyars of Mysore carried forward the tradition. Historians say that it was Raja Wadiyar who ascended the throne at Srirangapatana in 1610 and decreed that Dasara be celebrated on a grand scale and this tradition has continued.

So Dasara in Mysore has a royal connection that goes back in history to the Medieval ages. It was celebrated by the Maharajas till the late 1960s after which the institution of royalty was abolished. However, the Government of Karnataka continued to organise the festival and the spirit with which it is held is reflective of the glory of a bygone era.

The Mysore Palace, which is among the most popular monuments in the country, occupies centre-stage and classical music and dance programmes are held for nine days. The entire city comes alive with a variety of programmes held in nearly a dozen venues and they range from poets conference to adventure sports, Bharatnatyam and Kuchipudi to Kathak and Odissi. The youth enjoy contemporary music.


On display
Inside the palace, traditions as recorded by ancient travelers like Domingo Paes of Portugal who visited “Bisnaga” or Vijayanagar during its heydays, unfolds. Members of the royal family observe the rituals as ordained in the scriptures. The golden throne whose origin is steeped in mystery and is linked to the Pandavas, is put on display for tourists and the public. The scion of the royal family Srikantadutta Narasimharaja Wadiyar observes the religious rites and ascends the golden throne, holds a private durbar accepts “tributes” from family members and the courtiers in what is a throw back to the past.

A retinue of courtiers, caparisoned elephants, camels and mounted police accompany Wadiyar who is seated in a silver chariot or a palanquin. They visit the temple in the palace premises where special prayers are offered to the family deity of the Wadiyars on all the nine days. But these traditional practices are not open to the public but one may witness the same on obtaining special permission.

For the public though, it is the Vijayadashami procession which is also called the Jumboo Savari that marks the culmination of Dasara. The “Dasara stars” are of course the 12 elephants led by Balarama who carries the 750 kg golden howdah with the idol of Chamundeshwari on his back and marches from the palace to Bannimantap grounds to bring down the curtains on the festival.

Under the Vijayanagar emperors, the procession was akin to a military parade. The Wadiyars continued with the tradition. But in the present times, the procession comprises colorful tableaus depicting the cultural heritage of the State which is on full display during Navaratri celebrations.

During the festivities of Dasara, the “Festival of Dolls” is a favourite among the old and young.

Display of dolls in households is part of the Dasara. The display is arranged in nine steps to coincide with nine days of the festivities. The first step has the Pattada Gombe (Raja Rani dolls) which are the dolls of the king and queen of Mysore. Women and children of the royal family used to keep the dolls at the Gombe Thotti at the Mysore Palace. They inherited the tradition from the Vijayanagar period. The royal family had collected the dolls from across the country and the world. A wooden model of the old palace, which existed in the fort before 1897, can be seen at the Southern end of Gombe Thotti. To promote and revive the concept of celebrating “Gombe Habba”, which was slipping into oblivion, “Bombe Mane” was started by Mysore-based Ramsons Kala Pratishtana, a foundation promoting cultural art, during Dasara in 2005.

During Dasara, wresters learn Nada Kusti, the traditional form of wrestling patronised during the reign of the Mysore rulers, from the master wrestlers (pehelwans) in the the Garadis or gymnasium. People also get a chance to witness another form of wrestling, Vajramusti Kalaga, which is organised on the palace premises. The end of the Vajramusti Kalaga also signalsthe start of the royal procession by the scion of the royal family Srikantadutta Narasimharaja Wadiyar